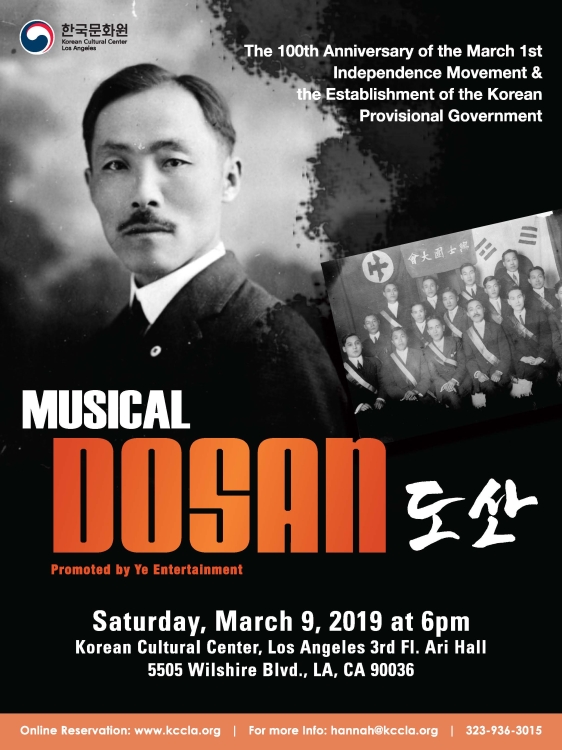 Special Performance for the 100th Anniversary of the March 1st Independence Movement & the Establishment of the Korean Provisional Government
Musical Dosan : the life of Dosan Ahn Chang Ho

**Thank you for your interest in Musical "DOSAN" This event has been completely reserved and we are unfortunately unable to take more submissions.
We hope to see you at our next event!

This is a story of an extraordinary man, Dosan Ahn Chang Ho, an inspiring public speaker, intelligent educator and a community leader, driven by his compassion for freedom, equality and liberty, who dares to take a stand and change the history of Korea.

Dosan Ahn Chang Ho is known to be one of the key leaders of Korea during the 20th century during the Korean independence movement from the Japanese colonization as a moral and spiritual leader of the Korean American community in U.S.

Dosan Ahn Chang Ho was one of the founding leaders of the Provisional Government of the Republic of Korea in 1919. He wrote the lyrics of the South Korean national anthem. He dedicated his life in educating the Korean Americans through building schools and establishing citizens’ organizations. In the turmoil of the World War II, Dosan Ahn Chang Ho inspired the Korean American community to rise up by promoting work ethics and democracy.

This year is the 100th Anniversary of the March 1st Movement, a peaceful demonstration as a part of Korean Independence Movement that rose up against the Japanese Imperialism in Korea (Joseon). It signified the self-determination of the people to resist the military aggression by Japan under the Rising Sun Flag during WWII. About 2 million people participated in more than 1,500 demonstrations. Even though it resulted in massive killings of innocent people by the Japanese army, this movement became a catalyst for the Korean Independence Movement and further establishment of the Korean Provisional Government. It also influenced the growth of nonviolent resistance in India and many other countries.

As a part of celebrating the 100th Anniversary of the March 1st Movement, the musical “Dosan” has been planned. “Musical Dosan” will begin with a solo by Dosan Ahn Chang Ho, continue on with a scene in where Dosan gives a powerful public speech to the people to rise up to fight for their freedom and liberty. Then it tells the story of how he and his family come to California, U.S., to get education and how he becomes the moral and spiritual leader of the Korean American community. The musical takes the audience into the intense and profound scene where Dosan declares his beliefs in front of the aggressor, Ito Hirobumi and the breathtaking scenes of the 3.1 March Movement. The finale where the entire cast sings the old version of the Korean National Anthem will be epic, grand and uplifting.

Musical “Dosan” will be one of the most exciting and significant musicals in the Korean American history. With a cast of exceptional singers and talented young local Korean American artists, this show will bring hope for the future of Korean American musical theater. Most of all, this show will touch the hearts of young Korean American generations to appreciate their roots and their ancestors’ lifelong struggles for freedom, equality and liberty and inspire them to rise above and beyond.

The performance is free, but phone or online reservation is required.

1. Kwaejaejeong (Public Council of People)
In 1898 July 25th, 19 years old young adult An Chang-ho gives an address at Pyongyang, Kwaejaejeong. He asserts that our people need to learn the way to protect and be awake in order to save our nation by themselves. People who are impressed by his address started singing a song about protect our nation from foe who took away the nation from them through learning all together.

2. Facing Hae-ryeon
Dosan meets his fiance Hae-ryeon and talks about his further plan, and tells her to delay their marriage because their newly formed family would suffer. However, Hae-ryeon rather encourages Dosan and promises him that she will help his work.
They confirm their love each other and sing a duet.

3. Studying Abroad in US
After the marriage Dosan goes to study abroad. He looks at Hawi in the middle of the Pacific Ocean, and decide that even though there are any hardship, he would never fall down, as he sings a song. Then he decides to call himself as “Dosan”.

4. US San Francisco
After arriving San Francisco, Dosan shows the letter of the recommendation from missionary Underwood to the immigration officer, and passes the immigration process. Then he starts studying at an elementary school with the students, and becomes an initiative person in the neighbor to adapt to the US society.

6. Orange Farmers
The orange farmers work happily due to the fact that they can earn money in the foreign nation even though they are they gets blame from the owners under the hot sunlight. As they talk about their sorrow about being illiterate, they asked Dosan to teach them to write. They sing to hope their learning is helpful on Joseon’s independence.

7. Korean Public Organization
Dosan united and educated the Korean American, and made public organization. Through this organization, the Korean Americans become one to publish a newspaper in order to exchange information. Dosan also publish an independence paper in order to let the world know about losing their country because of the Protectorate Treaty between Korea and Japan of 1905.

8. Farewell
Dosan looks for way to save his nation from Protectorate Treaty between Korea and Japan of 1905, and he decides to go to Joseon by himself. He tells his wife Hae-ryeon about this, and Hae-ryeon sings an aria with sadness and sorrow for herself and her child that would be left.

9. Dae-sung School
After coming back to Joseon, Dosan establishes many schools at several places. Dosan visits the schools with Chi-ho Yun, Gu Kim, and Dong-nyeong Yi, and sings that the only hope to protect Joseon is awakening the young adult and teaching them.

10. Chosen Resident-General
After hearing Dosan’s fame, Resident-General Ito Hirobumi calls Dosan, and talks about his vision over Asia to persuade Dosan to be with him. However, Dosan rejects Hirobumi by saying that he will never be persuaded by any proposal, and sings that they will go on different direction.

11. Harbin Station
When Ito Hirobumi arrives at Harbin Station to meet Russian Treasurer Vladimir Cocosev, JungeunAn snipes Hirobumi through the crowds. Then he shouts “Cheers for independence in Korea!” in Russian. The Japanese polis had suspected Dosan, and had tortured him after arresting him.

12. Asylum
After getting tortured, Dosan could not stay anymore in Joseon, so he exiles back to US. He sings a song about his emotion that leaving his nation and leaving his people.

15. Shanghai Republic of Korea temporary Government.
Dosan transfers the money that Korean Americans had collected with their efforts, and tries to encourage the independence movement. People offer him to be the president of the temporary government, but he rejects it. Although he rejects the presidential sit, he becomes a prime minister and vice chancellor of the government, so he becomes the head of the Shanghai Republic of Korea temporary government.

16. Temporary Government
Dosan was sad about the temporary Government head Dong-nyeong Yi and Syngman Rhee fights for Ideology. Dosan claims that Chosen people should become one under the one heart towards the Korean Independence, not under any other ideology. As he hopes, he sings an aria.

18. Dear young adults
After Syngman Rhee and Dong-nyeong Yi fought for their ideology, the head of the temporary government was led by Dong-nyeong Yi and Gu Kim. A young adult, Bong-gil Yun comes to see Gu Kim, and tells that he will sacrifice himself to throw a bomb. They sing that his death won’t be in vain for the independence.

20. His will
After harsh torture, Dosan was released from imprisonment due to the health complications, and spends painful days at the hospital. Thinking about comrades who left first during independence movement, worrying about his lovely wife Hae-ryeon and his children, he writes a letter to his family.


* The program is subject to change without notice.