The 16th Korea Arts Foundation of America Award Recipient Exhibition: All of the Above 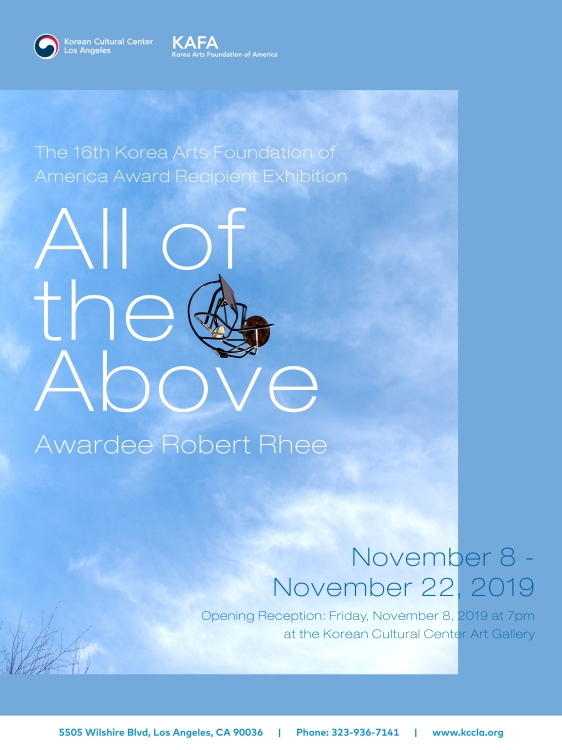 All of the Above

The populations served by the KCCLA's range of offerings is equally eclectic: primary schools, artists associations, the LAPD and US Army, researchers and universities, Los Angeles municipal governments, tourists and more. One need only peruse the KCCLA's calendar of offerings to get a sense of it as a well-used multipurpose space.

Robert Rhee's solo exhibition, "All of the Above," takes its cues from the KCCLA and is interested in the gestural qualities of shared use and negotiation. Conceived of as a sequence of formations around the KCCLA's most shared resource-a fleet of folding chairs-the exhibition responds to the processes of the space, which will serve as both a gallery and a Korean language classroom.

The mobile architecture of the folding chair enacts states of attendance: gathering, resting, migrating, as well as being absent. The shared space of the folding chair is not repurposed for the exhibition but rather, in the spirit of the KCCLA, more actively multipurposed and presented in its mixed use.

Rhee’s sculptures utilize cultivated materials and the latent human gestures they carry. In Occupations of Uninhabited Space gourds are grown inside rigid forms which forecast and reroute their growth. The negotiations between gourd and forecast arise out of the cultivation process and take on significance in relation to it.

Typecasts visualizes the farming and propagation of stable types as expended energy. Using a modified burnout casting process this new series of bronze sculptures draws a connection between casting and cultivating. The typecast names a kind of cultivation that feeds individuals back into their types. The term ’typecast’ is borrowed from performance and describes the repeated casting of an actor in the same type of role. Attending the point-of-view of the typecast actor, Rhee focuses his attention on internal dialogue, constructed continuity, releasement.

The exhibition is open to the public and the show will run until November 22nd, 2019.

All of the Above is the 16th Korea Arts Foundation of America (KAFA) Award Recipient Exhibition. KAFA is a non-profit, public benefit organization in the Los Angeles area with a mission to promote creativity, research, and exhibitions in the arts. Funding and support for this exhibition has been provided by KAFA and the Korean Cultural Center Los Angeles.

< Robert Rhee >
Robert Rhee (American, b. 1982, Bronx, New York) lives and works in Seattle. His work has been exhibited nationally at the Portland Museum of Art, Oregon; the Hunterdon Art Museum, New Jersey; White Columns, New York; the Fort Worth Contemporary Gallery, Texas; and the Korean Cultural Center Los Angeles, California and internationally at the 10th Berlin Biennale, KW Institute for Art, Germany; and the Ilmin Museum of Art, South Korea. In 2018 he was awarded the Korea Arts Foundation of America Award for Visual Art and was nominated for a Stranger Genius award in 2016. He received his BA from Yale University and MFA from Columbia University, and is currently an Assistant Professor at Cornish College of the Arts.
List