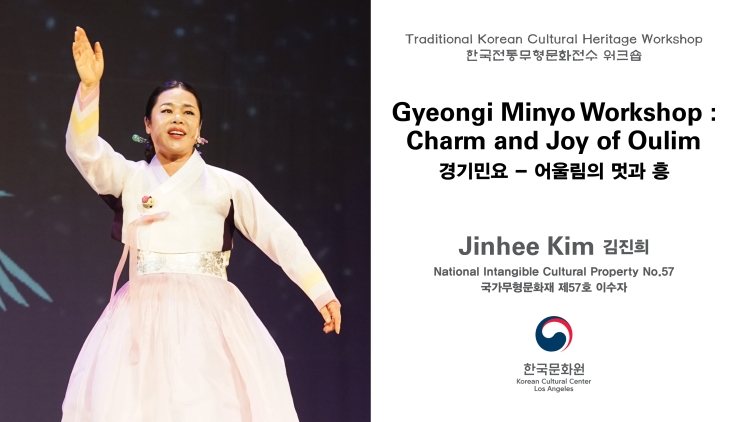 At this workshop, people will be able to learn Gyeonggi Minyo which is refers to the Folk Songs of Gyeonggi area. At the end, participants will perform the songs they learned at the workshop.

Ms. Jinhee Kim is the National Intangible Cultural Property No.57 who learned from Ms. Eunjoo Lee, Intangible Cultural Property No.38 whose master is Mr. Youngchoon Paek. This time she will teach a few exciting popular repertoires such as Changbutaryeong, Baennorae and Jajinbaennorae. Ms. Kim is also the CEO of Oulim Korean Gyeonggi Folk Song Inc.

Gyeonggi Minyo refers to folk songs handed down in Seoul and Gyeonggi-do. Some of the pieces such as Gyeonggi Gin Japga (Long Miscellaneous Songs of Gyeonggi, also known as Gyeonggi Jwachang) are designated as important cultural heritage. Initially, Japga meant vulgar songs, as opposed to Jeongga (Classics) like Gagok (Lyric Song Cycles Accompanied by an Orchestra) or Gasa (Narrative Song), but today Japga has come to mean long pieces of vulgar songs that are sung seated.

Gyeonggi Minyo had been spread out through Seoul and Gyeonggi Province and the most of the songs have very bright and cheerful rhythm. Nolaegarag, Changbutaryeong, Arirang, Gyeongbokgoongtaryeong are some of the songs, and these songs have a variety of beats such as Gootgeori, Semachi, Jajinmori, Eotmori, Joongmori and Joongjoongmori.

Changbutaryeong is the most popular Gyeonggi traditional folk song from central Korea. Changbu means the husband of shaman and also the spirit of shaman and clown. Changbutaeryeong had been called to console these spirits and later has been spread to the public. This Gootgeori beat song has very delicate and sophisticated tunes, and also needs a wide range of octave so singer should be well-trained.

Baennorae had been sung by fishermen along the East Sea and gradually became popular nationwide. They expressed their excitement and while wishing for a full load of fish with cheerful tunes and catchy melody. The beat is rhythmical Gootgeori.

Jajinbaennorae, usually called after Baennorae has a unique tone at refrain. This song tells the life and romance of fishermen with a faster and more exciting Jajinmori beat. It is a conversational style song.


The workshop will provide a chance to learn singing Changbutaryeong, Baennorae, Jajinbaennorae and will perform together.

Admission is free, and reservations can be made online or over the phone.
Press Release
List