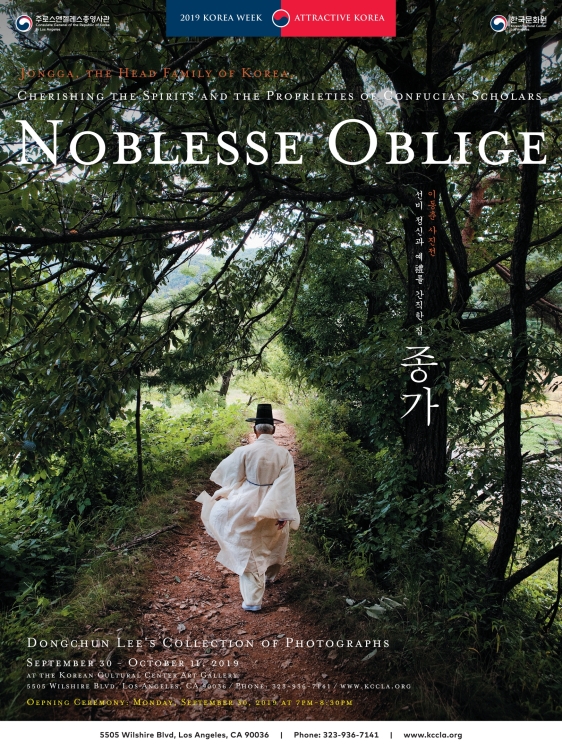 Consulate General of the Republic of Korean in Los Angeles Presents

Jongga: The House of the Head Family Cherishing the Spirits and the Proprieties of Confucian Scholars is a collection of photographs that introduce the traditional culture of Andong, which has long been acclaimed as the mecca of Confucian scholars and jongga, or the head family of Korea.

The city of Andong, located in Gyeongsangbuk-do in the southeastern region of Korea, has been well known for Dosan Private Academy (Dosan Seowon), Byeongsan Private Academy (Byeongsan Seowon), Bongjeong Temple, and the Andong Hahoe Folk Village that are listed as the UNESCO World Heritage. But it should also be noted that Andong is a tradition-bound city where lots of jongga families representing the major clans of Korea had put down their roots.

For more than a decade, the photographer, Ms. Dongchun Lee, has recorded in photographs the traditional rituals that were performed quietly and undisturbedly in the houses of the jongga family members in Andong and have encountered every aspect of traditional culture related to food, clothing, and shelter in old Korea.

The exhibition is open to the public and the opening reception will be held on Monday, September 30th, 2019 at 7:00p.m. at the KCCLA 2nd floor art gallery. The show will run until October 11th, 2019.

Dongchun Lee
Photographer Dongchun Lee has devoted herself to propagating the righteousness and the spirits of the deceased sages of old days by taking photos of the jongga family life related to the traditional culture of Korea.
Press Release
List