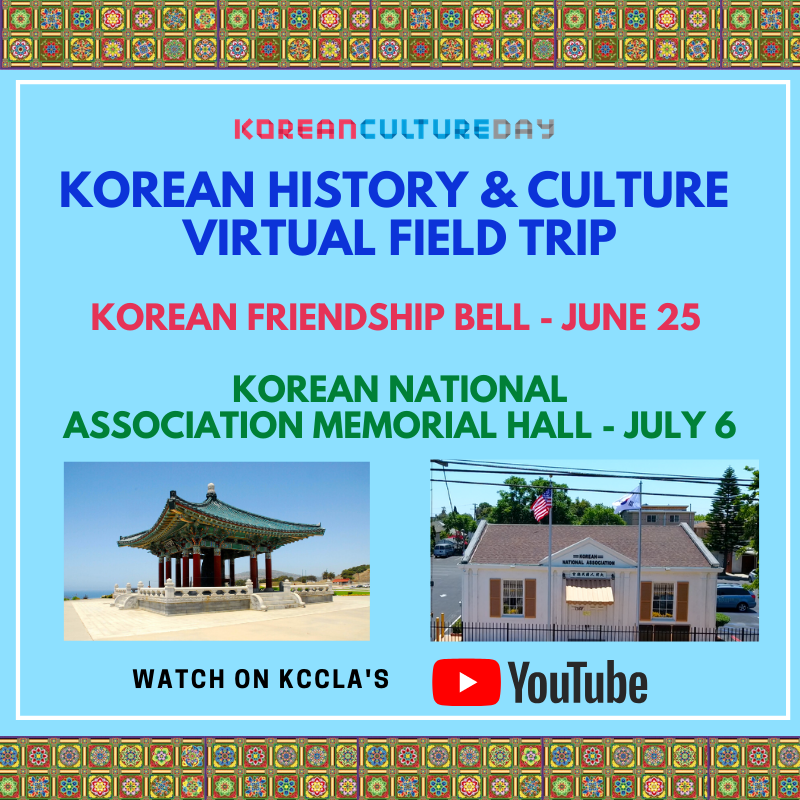 In order to prevent the spread of the novel coronavirus (COVID-19), as the government is taking social isolation guidelines, schools are closed, museums are closed, and teachers and students are living in isolation due to the closure of city and county area parks. KCCLA has provided video content with which all locals can experience Korean history and culture.

This video content was conducted by narrators presenting the Korean Friendship Bell and the Korean National Association Memorial Hall, where Korean American immigration and independence movement histories are exhibited.

Korean Bell of Friendship: This bell was a gift of friendship donated to the people of the United States by the people of the Republic of Korea in the sense of thickening the friendship and sincerity of the two countries in celebration of the 200th anniversary of the United States' independence. The bell was built in a traditional Korean style building with a roof having blue and white tiles. It was painted with Korean monochromatic patterns, and was completed on July 4, 1976 in Angels Gate Park in San Pedro near Los Angeles. It is a designated cultural heritage site #187 of the city of Los Angeles.

Korean National Association Memorial Hall: Founded in San Francisco on February 1, 1909, the Korean National Association was established in Los Angeles on April 17, 1938, as 30% of Korean Americans in the 1930s settled in Los Angeles. The General Assembly was completed at the location of the ceremony and the inauguration ceremony was held. In addition, the National Assembly Memorial Hall was designated on October 2, 1991 as the “Korea Independence Hall” and the Los Angeles City’s Historic Site #548.

This “Korean Culture Day” will be introduced through the KCCLA social media over both days. First of all, the Korean Friendship Bell, a cultural heritage site designated by the City of Los Angeles, will be introduced on Thursday, June 25th. This video was narrated by Ernest Lee, who is the Executive Director of the Korean Friendship Bell Preservation Committee. The cultural and symbolic implications of the bell, historical events related to the closing of friendship, the ideals and hidden meanings of design and other species, and the values and future shared by both Korea and the United States are introduced. The historical site of the Korean National Assembly and Memorial Hall, the history and activities of the American Independence Movement, the history of Korean American migration, diplomacy, military and education related to Korean independence The video will introduce Shinhanminbo, which supported the independence movement and is displayed at the People's Assembly Memorial Hall, and intertype typewriters that produced newspapers using the new Korean type.

KCCLA’s director, Wijin Park, stated, “For this Korean Culture Day virtual event in June, we have selected two sites that have been registered as designated historic sites in the City of Los Angeles as a place to explore Korean history and culture. I hope that it will be a meaningful and valuable time to learn and feel the independence movement and immigration history of Korea through these online videos provided along with expert explanations.”