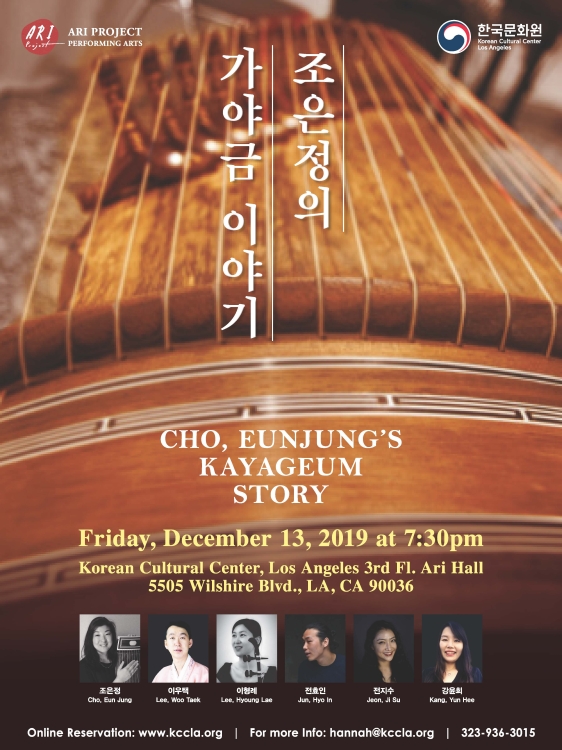 The Korean Cultural Center Los Angeles (KCCLA) and Kayageum Story present the “Cho Eunjung’s Kayageum Story” on Friday, December 13, 2019 at 7:30 P.M. on the 3rd floor of the Korean Cultural Center Los Angeles, Ari Hall.
“Cho Eunjung’s Kayageum Story” will portray the harmonious mingle between tradition and modern through its selection of music. Accompanying the traditional Korean sanjo music will be the more contemporary synthesizer, which together, they will deliver beautiful tunes with modern dance moves.

With K-Pop attracting locals here in Los Angeles, Korean musicians are determined to let people know about traditional Korean music (Gugak) which could be called the starting point of modern Korean music. By collaborating traditional Gugak instruments with western musical instruments like the synthesizer, the music will surely capture the hearts of the audience. Cho Eunjung with her Kayageum and Kang Yunhee with her synthesizer, they will play various music like “In the Flower” and “My Soul Has Been a Breeze”, and Lee Hyounglae with her haegeum will play “Beautiful Things in the World” and more.

Cho, Eunjung has performed at UCLA, Cal Arts, Los Angeles County Museum, Fox Performing Arts Center, and many other places. Her degrees include Bachelor and Master’s Degree in Kayageum Performance from the DanKook University. She also was a member of the National Orchestra and worked as an Instructor at the University of Arts and at Arts high school in South Korea.


-PROGRAM-
1. Hung
Kayageum : Cho, Eunjung / Janggu : Lee, Woo Taek
This piece was written for a 15strings Kayageum, which was a reconstruction of the original 12 strings Kayageum by Song, Kum Yeon in the 1970s. Now it is played by 18 strings. Hung is very bright piece and playful rhythms, and moves into a chatty conversation.

5. Cheongsonggok
Danso : Lee, Woo Taek
Cheongsonggok or cheongseongjajinhanip, a solo piece for daegeum (large transverse bamboo flute) or danso (small notched bamboo vertical flute), originated from the variations of the vocal melody of Taepyeongga, one of the most popular repertories of the classical lyric song genre, Gaggok. This piece is called Cheongseonggok (the song of the clear, high sound) because of the clear timbre generated by the daegeum sound in the high register. In addition to the finger holes, the daegum has a hole called cheonggong on which a membrane is attached, and when a performer pushes the high tessitura the shaking membrane makes a buzzing sound. The vibration of the membrane, collected from a river reed, produces a unique sound called cheongsori, prominent in the high register of the instrument. Throughout the song there are contrasting phrases between long sustained notes and clusters of grace notes that accentuate the clear, tonal quality of the bamboo flute.

6. Kayageum Sanjo Sungguemryeonryu
Kayageum : Cho, Eunjung / Janggu : Lee, Woo Taek
Sanjo, literally meaning “scattered Melodies” is a style of traditional Korean Music, involving an instrumental solo accompanied by Janggu. The art of Sanjo is a real crystallization of traditional Korean melody and rhythm which may have been handed down by rote generation after generation.

* The program is subject to change without notice.
List